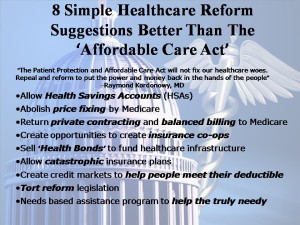 The Media has been awash this past two weeks with mostly bad news regarding PPACA (Patient Protection and Affordable Care Act).  That was the original acronym but it got punted after President Obama’s reelection to ACA (Affordable Care Act).  This was intentional because now that the government is in charge of the health care market all citizen’s are a liability and all that concerns the administration going forward is costs.  Quality, service- forgetaboutit!   Let’s try the VA on for size.  That is the future of the Affordable Care Act, necessarily so as written.

If we work from this paradigm we can understand and predict the future of this program, unless some brave souls in the new Congress make some serious changes like rescinding the law for starters.   Over two years ago on my prior blogs I made statements like “Medicare for all…Poor saps its Medicaid for all”.  That is now true, the medicaid roster is expanding at an unprecedented rate.  I also indicated that take home pay would never improve as the taxes and costs of this debacle role out.  Has anyone read the latest wages report?  As predicted, we aren’t improving our personal take home pay.

Well, rather than rail any further about the obvious (at least I hope most folks see the obvious and don’t continue to deceive their good intentions for true observations) I wanted to dust a few prescient paragraphs from a prior submitted editorial I wrote in 2012.  These paragraphs also serve to inform the interested public and the predictable outcomes that history has taught us repeatedly regarding price fixing, monopolistic behaviour and the like.  We must get back to free market principles nevermind that the issue in the law is health care.   I would like to point out that the current lower gas prices and rosey outlook on our personal checking accounts are a result of free market principles.  High gas and oil prices resulted in an open and aggressive competition to find ways to extract fossil fuels.  This was done to supply the market based upon demand signals.  Guess what?  Despite the best efforts of the current administration- supply was majorly increased in our domestic and global markets and the result?  Enough lower fuel costs to offset the heinous price gouging created by PPACA.  Let’s hope the balance can continue to our favor as consumers.  And now for the dusted paragraphs.

“So How Is This Healthcare Reform Going?  The Patient Protection and Affordable Care Act of 2010 Is Anything But Affordable

In March, 2012, I attended for the second time the annual meeting of the Physicians’ Counsel For Responsible Reform (PCRR ) in Washington DC.  At this forum, I have had the opportunity to sit and discuss the issues of delivering health care in the present economic environment to PCRR. There are now several physician congressmen in DC who understand that individuals will not get good or affordable health care if it is controlled by the central planning methods outlined in this legislative debacle.

I recommend readers to review Congressman Michael C. Burgess’, MD book titled DOCTORx in the HOUSE published in 2011 for a firsthand account of what socialized medicine looks like, as well as how the Patient Protection and Affordable Care Act (PPACA) was brought to legislation and the American people. On page 105 of his book, he explains how Benjamin Franklin brought the practical application of risk theory (insurance) to American soil. Congressman Burgess explains that for shared risk to work, the premium amount cannot be an arbitrary number. Premiums are based upon actuarial science, balancing expected losses against expected earnings.  Our government’s as well as the people’s expectation that all things related to health be covered by such a model has made it impossible for any of us to have affordable insurance. This fact is part of the reason 20-25 million of the reportedly 40 million uninsured no longer wish to participate in the health insurance market. I, for one, am one of those who chose not to participate in the “first dollar coverage” model that is being force on most market participants. My assessment is that it is wasteful, monopolized at the local level and thus a terrible deal.  I take exception to the fact that our government has legislated that my voluntary decision and right not to participate in this market is going to be removed by legislative force.

A main issue of the health care crises is how we as Americans presently capitalized health care through an insurance model. This has over time turned into a private business oligopoly which has indeed made health care unaffordable for many Americans.  I remain deeply critical of our government’s desire to create a government monopoly to replace the current corporate oligopoly. That is essentially what the Patient Protection and Affordable Care is attempting to do. Recently I am on record stating that I am convinced this legislation is unconstitutional primarily because as legislated, the Executive and Congressional branches of government are crossing the lines and mandating forced commerce on individuals from birth to death.  It is appealing by many to think that since most of us buy insurances of many stripes, it seems on the surface “ok” to mandate we buy health insurance. While appealing at first pass, in the following passages, I hope to convince readers, it just isn’t that simple. Insurance does not guarantee healthcare, neither actual care nor access. Having an insurance card doesn’t mean you are going to get to see the doctor, just ask Medicaid beneficiaries and lately, Medicare beneficiaries. So how does forcing us to buy an ineffective product solve the health care concerns?”

See the bold in the previous paragraph about constitutionality- This past week the Supreme Court is again listening to arguments about whether the plain language of the law should be followed (of course it should).  If they deem “Yes” then suddenly a majority of the subsidies given out so far to promote this disaster (under the federal exchange) are not legal.  All buyers from states that so far have declined to start a state based exchange will technically owe their subsidy payment back to Uncle Sam.

And finally to the heart of the matter.

“Price controls currently exist through the government run Medicare and Medicaid fee schedules. This country’s founding principles are predicated on the rule of law, yet the Medicare program violates the concept of contracting, an essential component of rule of law. In fact our government should be seeing to it that rules of law are followed- that is pivotal to protecting our individual rights. Medicare schedules are not contracts nor negotiated at the provider level; instead they are recommended by a small government appointed committee within the CMS–Center for Medicare and Medicaid Services. Its job is to allocate and reallocate dollar resources based upon annual historic utilization of services.  This is not how a market should work. The present system punishes the higher volume (higher demand and usually more efficient delivery) services by cutting the reimbursement per unit and rewards the less efficient, lower volume services with higher reimbursement. Due to these policies, presently in our local market, the very same services provided by the hospital system gets paid by Medicare several fold times what a private practice enterprise will be reimbursed. This is not the hospital’s fault; this is how the system is presently set up. The reasoning, according to the payment model is that outpatient private providers are “churning” services and the hospital must be subsidized due to the lower volume. This defies what is really going on.  The patients are accessing and utilizing the more readily available, more efficient and frankly, less expensive outpatient providers and avoiding the bureaucratic, less accessible hospital system-for the exact same services.  If the committee were thinking clearly, they would allow the forces in play to continue by encouraging more access to the better system. Instead, due to accounting rules set up, they reward the less efficient and punish the better provider.  A more individually driven, free market would resolve the supply and demand forces. The purchasers (patients) of the service would naturally choose the outpatient providers because the cost is less, the quality similar, and access far easier. More providers would increase their service base until the demand was met and the hospital would likely lose outpatient market share, unless it can provide more competitive pricing.

Accelerating the problem, insurance companies use the government price structure for their payment benchmarks. They reason, if providers are willing to work under the government fixed fees, they must be willing to work for them for similar payment. Meanwhile they tell the public premiums are rising because they are “subsidizing” Medicare and Medicaid- this simply isn’t true. The insurance industry is also involved in price controls. Some price protections result in overpayment for services, driving an artificial supply excess for higher paying specialties, name brand medications and hospital procedures. Price controls are also artificially underpaying many areas and explain the main reason adult primary care and general surgery are currently facing a provider shortage crisis. The higher end pricing continues by gain sharing against the less powerful, lower paid providers-the stronger lobby wins (see CMS comments earlier). We can fix the Medicare access problem as well as the government’s budget problems with Medicare tomorrow by returning private contracting and balance billing back to the Medicare program. Since the people won’t inform the legislators that access is more important than having a Medicare card, the legislators are afraid to make this legislative act.”