A special report feature in Friday, July 20th’s Wall Street Journal explains how fake cancer drugs entered the United States.  This story highlights how the socialized health care of other nations is riding off the backs of the higher paying private (for now) health care payers such as the US.  For example, countries like Canada’s socialized health system contributes the exorbitant prices of medications.  Since drug companies can’t make much of a profit in Canada (because of their price fixing), the cost of medicine in free market countries rises.  It also highlights how even US citizens will seek market alternatives for less expensive medication. In this sad case, people were hurt in the end. 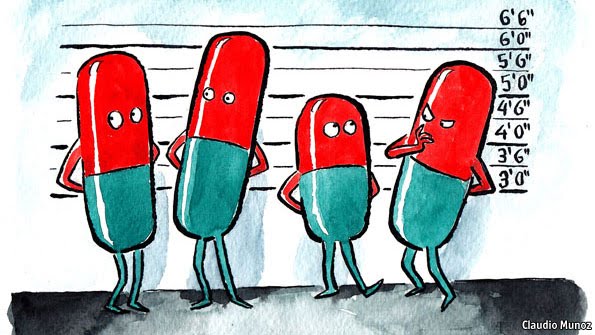 In the last 2 election cycles, Americans have been upset with the high cost of prescription medication. People were so upset, that the government (under President George W. Bush), developed Medicare part D to help cushion the cost of prescriptions to Medicare consumers.   It became very popular for patients to start defying our US by buying medication across the Canadian border.  At first, people were driving up to Canada for meds, but soon the internet allowed people to purchase drugs from Canada and have them delivered to their door in America.  I remember some Democrat congressmen even encouraging people to “buy Canada”, apparently not caring if they openly defied US and FDA regulatory law.  These public encouragements gave the populous more courage to increase the consumption of Canadian delivered medication.

Patients would routinely ask me to print their prescriptions at their appointments and inform me they were planning to get their name brand medication cheaper through Canada. They would also ask me what I thought of this and I vividly recall trying to explain to folks, “buyer beware.” I would tell them that to my knowledge our FDA was extremely stringent in trying to guarantee that we were getting safe, equivalent medication.  I would remind my fellow Americans that we did pay high premiums for our medications and the reason Canada could sell them their medication cheaper was because their government was the major purchaser (if not the sole one) of prescription medication.  As the sole purchaser, they were setting the price of the medications. We Americans were in effect “subsidizing” Canadian consumers their pills.  At the beginning of this process, the Canadian Loonie was trading approximately 18-22 % below the US dollar. This meant the 20-30% discount Americans were experiencing on the Canadian meds was pretty much the arbitrage trade between the currencies.  The Canadians weren’t even passing their savings to us; they were getting US dollars at Canadian prices.

Next, I would explain to my patients that the Canadian government would annually set how much of the various medications they would buy.  Their price controls also were matched with supply controls.  So then I would ask myself and my patients to do the math (a thought experiment, if you will).  If Canada has a set, annual amount of Lipitor (name brand cholesterol medicine) it buys, it is assumed the government meant to only buy enough Lipitor for its population, not the US market as well.  Since Canada only bought enough medication for its people and it is a controlled market, how do we think the Canadians are going to sell us any prescription medication without running out of enough stuff for themselves?  Answer: they can’t.  OK, so if they have inadequate supply to sell excess product to us, how can we expect safe, reliable and legal product to come to us from across the Canadian border? Answer: we can’t.   Conclusion: Buyer beware. It is highly probable that American buyers will be purchasing either illegally obtained (meaning stolen and repackaged or purchased outside of Canada’s traditional, controlled and regulated market and resold) or counterfeit/placebo medication.  I would conclude by telling my patients that I don’t condone breaking the law and that logic dictates this is likely a “shady deal”. Being a person who believes in individual liberty and personal responsibility, I would print their medication as requested and explain that I do not wish to know if they are buying medication from Canada or not, I would assume they are filling their prescriptions per normal protocol.  I would also add that I would prefer our government representatives not openly defy their own legal system and that if they wished to assist in better market prices they should go about it legally.  Eliminate or change the laws but don’t break them while speaking at the pulpit.

Now, on to how the US side’s price fixing policies contributed to the counterfeit Avastin,  chemotherapy story.  According to the article, a company out of Canada called Canada Drugs Group of Cos. was the United States source for the counterfeit product. They used a middle man company out of Montana (nice to share the border) called Montana Healthcare to sell product to some US physicians who infused chemotherapy (oncology doctors). One of these doctors was quoted as stating “we’re businessman, trying to make a living practicing medicine” at the end of the article. What that statement was referring to was that the doctors tried to buy the least expensive product they could in order to maintain a better profit margin. The reason they were feeling a profit margin squeeze is that in 2005 Medicare (and thus also large insurers [see my article regarding price fixing]) cut the prices they would pay for outpatient chemotherapy infusions to treat cancers. Prior to 2005 there was a more free and competitive market to purchase medication. The people infusing the medications (doctor offices, infusion centers, hospitals, cancer centers) were paid in a more flexible market and the government was allowing higher reimbursement as well.  This meant the providers had a higher profit margin. Yes, they made more money at what they did, is that so bad?  Apparently the government couldn’t stand doctors making money, so they lowered the reimbursement (drastically I might add) through artificial price fixing via Medicare.  This put pressure on the providers to find less expensive medication or perish. According to the article, approximately 80 US physicians have been buyers of the counterfeit product (seems like only a handful relative to the number of oncology doctors nationwide). These physicians should have heeded the mantra of “buyer beware” as well.  If something is “too good to be true” it is.  It is also important to understand that US government healthcare policy directly led to them purchasing counterfeit medications as a necessity to stay in business.

In the end, this is a story of excess greed.  Price fixing, cost shifting, regulatory favoritism and other bad economic policies are causing Americans to pay more than they should for health care products.  If the socialized countries would allow free market forces when it comes to buying their medication, then instead of Americans paying stupid amounts to subsidize these markets, we all would likely see more plentiful and cheaper meds. US patent laws are also putting a major financial dent on consumers, but it also encourages drug development (see my prior article). The sad part of this story is that because of these incentives, US consumers are paying these high prices, but the socialized medicine countries benefit by getting to pay less than market prices.  They get to set the prices they pay for these products because the market is government mandated.

In a more level global market, we also wouldn’t have to break our own laws in order to gain access to mythical supplies of medication. Mythical supplies because these meds weren’t made and produced in Canada, rather Canada was a convenient, subsidized middleman in the global sale of medications. When the supply comes from worldwide producers, unreliable sources will potentially provide the lowest end of the price scale.  Safety and manufacturing regulation are definitely necessary. Once the makers know the requirements, then they can comply and begin to provide safe, effective products to the market. The habit we have to break is our and other government’s penchant to regulate price and create subsidies to lobby favorites. The market forces of supply and demand will take care of the price in the fairest, most efficient manner. The best cure for high prices (in a free market) is more high prices. This will result in a quick meeting of demand followed by lower prices (economics 101!). This is exactly how the market responds to grain production, cattle growing, house building etc.  Price fixing, on the other hand results either in undersupply (good, “safe” chemotherapy) or oversupply. I would submit this is why the insurance industry has demanded our government give them the last 30-60 million uninsured.   There is enough money sloshing around the health insurance industry coffers to pay for the care we are presently getting. They have created the illusion of inadequate funding to maintain the price-fixed, higher priced supply of more premiums.  More insurance and more government involvement is not the solution, it is the problem.